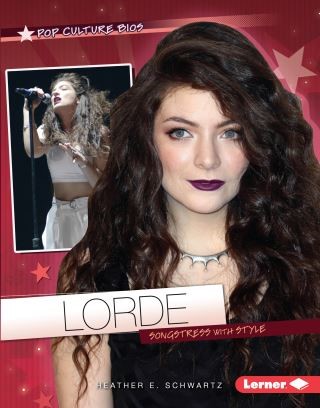 You probably know Lorde as a Grammy Award-winning singer and songwriter. But did you know that she:

• sang in a band named Extreme at the age of twelve?
• turned down a chance to perform as an opening act on Katy Perry's world tour?
• won second place in a worldwide literature competition?

Want to know more about the life of this stylish New Zealand-born artist? Read on to learn all about Lorde's school years, road to stardom, dreams for the future, and more!

When Heather E. Schwartz was thirteen years old, she tracked down several lead orphans from the 1983 movie "Annie" and interviewed them by phone. As an adult, she realized she could apply those same early instincts to a career as a journalist and writer. She is the author of more than 35 nonfiction children's titles, published by Lerner Publishing Group, Capstone Press, Teacher Created Materials, Lucent Books, and Tangerine Press, a Scholastic imprint. She has written articles for National Geographic Kids and Discovery Girls. In addition, she developed the content for KidsGetArthritisToo.org, the juvenile section of the Arthritis Foundation's website. Other credits in the children's market include articles for Teen, Girls' Life, and All About You magazines. Additionally, Ms. Schwartz is a former editor at Bridal Guide magazine, co-author of Bridal Guide Magazine's How to Choose the Perfect Wedding Gown (Warner, 2004), and contributor to The Takeout Cookbook (Knock Knock 2007).