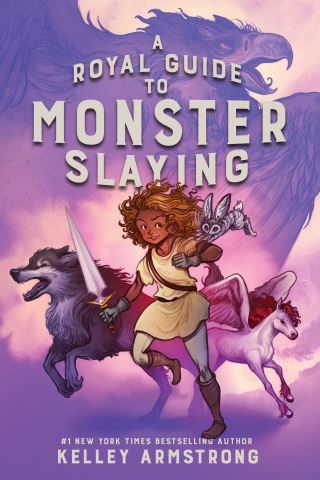 A Royal Guide to Monster Slaying

Monster hunting isn't for the faint of heart -- the first in a brand-new middle-grade series by NYT bestselling author, Kelley Armstrong.

Twelve-year-old Rowan is destined to be Queen; her twin brother, Rhydd, to be Royal Monster Hunter. Rowan would give anything to switch places, but the oldest child is always next in line, even if she is only older by two minutes. She resigns herself to admiring her monster hunting aunt's glorious sword and joining her queen mother for boring diplomatic teas. But tragedy shatters the longstanding rule, and Rowan finds herself hunting the most dangerous monster of all: a gryphon.
Accompanied by a feisty baby jackalope and a giant wolf that barely tolerates her, Rowan sets off on a journey that will see her join other unlikely allies: a boy with monster-hunting ambitions of his own, and a girl hiding dangerous motives. It will take all of Rowan's skills, both physical and diplomatic, to keep this adventure on track. The future of her kingdom depends on it.

Kelley Armstrong: KELLEY ARMSTRONG is the #1 New York Times-bestselling author of three trilogies for teens: the Darkest Powers; Darkness Rising and Age of Legends, as well as several thriller and fantasy series for adults and three YA thrillers (The Masked Truth, Missing and Aftermath). She is also the co-author (with Melissa Marr) of the Blackwell Pages series, a middle-grade fantasy series based on Norse gods. The Masked Truth received a starred review from PW ("overflowing with twists"), while Missing received a starred review from VOYA ("a compelling thriller that keeps the reader hooked until the end"). Visit Kelley online at kelleyarmstrong.com