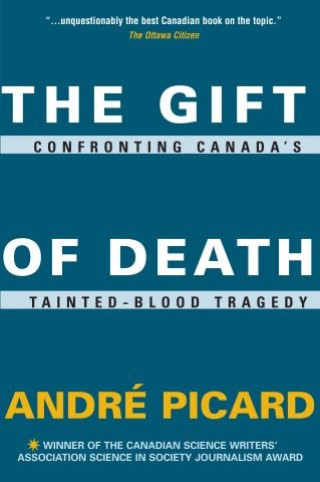 The Gift of Death

Few Canadians know of "Mr. L," an auto worker in Ontario who gave "the gift of life" in 1984 as part of a company blood donor drive. Many more will remember Kenneth Pittman, a 53-year-old heart patient, who died after being infected with AIDS -- from Mr. L's blood. They will also remember Mr. Pittman's wife, Rochelle, who contracted the virus from her husband because his doctor decided not to inform them of Mr. Pittman's fatal disease.

This tragic story is a microcosm of Canada's blood scandal. For over a decade, bureaucratic dithering, profits-over-protection responses, a paternalistic medical establishment and uninformed victims combined to create the worst health-care disaster in Canadian history. More than 1,200 people have contracted AIDS from tainted blood -- and the dying continues.

André Picard has produced the definitive analysis of this complex tragedy. All of the players are here -- public health officials who refused to take the "homosexual plague" seriously; the Red Cross, which worried about bad publicity and the bottom line; the too-little-too-late government that offered inadequate compensation for victims; and the arrogant medical establishment which sometimes took years to inform HIV patients of their condition; and most of all, the victims, who are paying for this betrayal with their lives.

The Gift of Death is a call for a serious re-evaluation of an outdated blood system to ensure that a similar tragedy never occurs.